Our Spiritual Lineage, the Kailasa Parampara 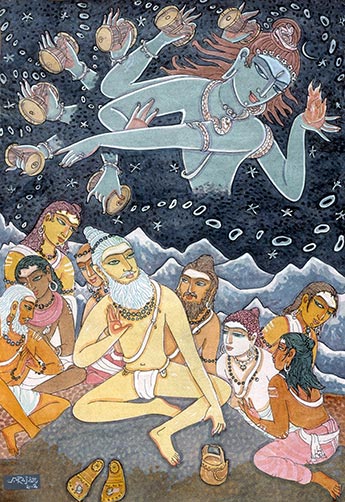 It is said in scripture that more precious than gold, and far more rare, is finding a satguru who can lead one to God Siva within. The holy gurus, the scriptures and the sacred temples are revered as Hinduism's three pillars of faith. Of these, the guru is paramount. The word guru simply means teacher, but in religious life, a satguru is a spiritual guide, an illumined mentor for devotees, the remover of darkness, a great being who lives in close communion with God, who has attained the deepest realizations and is able to lead others along the path. One of the distinctive and potent features of this monastery is its noble lineage of self-realized masters who know God and hold Truth in the palm of their hand. Most Hindu institutions are founded by an illustrious saint or yogi who brings light and wisdom to the world but ordains no successor to carry on his work after his death. Those that endure the centuries, like ours, have an established succession of leadership, with the mantle of authority passed from one guru to the next, generation after generation. It was through the spiritual authority of his master, Satguru Yogaswami of Sri Lanka, that Gurudeva established this monastery and set in motion its many dynamic forms of service.

Yogaswami was an enlightened sage and preceptor of the line of masters known as the Kailasa Parampara. In 1949, at age 77, he ordained Gurudeva as his successor in the lineage, which extends back 2,200 years, and beyond, to Maharishi Nandinatha and his eight disciples—Sanatkumara, Sanakar, Sanadanar, Sananthanar, Sivayogamuni, Patanjali, Vyaghrapada and Tirumular. The first known satguru of this lineage in recent history was the Rishi from the Himalayas (ca 1770-1840). From him the power was passed to Siddha Kadaitswami of Bangalore (1804-1891), then to Satguru Chellappaswami (1840-1915), then to Siva Yogaswami (1872-1964), then to Sivaya Subramuniyaswami (1927-2001), who ordained Bodhinatha Veylanswami (1942-) to carry forth his mission. As there have been countless gurus of this lineage in the past, so there will be many in the future who see God everywhere and light the way for seekers of truth. For a soul-stirring adventure into the lives of the satgurus of our lineage, read The Guru Chronicles.