The history, mission and structure
of America's first Hindu church

Saiva Siddhanta Church is a progressive institution vowed to uphold its spiritual heritage, derived from the Saivite Hindu traditions of South India and northern Sri Lanka. It is under the spiritual direction of Satguru Bodhinatha Veylanswami (photo, below), successor to the Church's founder, Satguru Sivaya Subramuniyaswami (Gurudeva, 1927-2001). We urge members and other devotees to "Know thy Self" through self-inquiry, meditation, traditional temple worship, scriptural study, guru bhakti and selfless service. We strive to bring members, devout shishyas of the guru lineage, into a pure, ethical life and guide them toward enlightenment and a direct consciousness of the Divine within, the necessary preparations for the Vedas' stated ultimate goal: moksha, freedom from rebirth, whence the soul, released from worldly desires, goes on in its evolution unencumbered by a physical body, a continuing unfoldment that finally leads to the complete and irrevocable merger of the soul in God, vishvagrasa. Jiva becomes Siva. 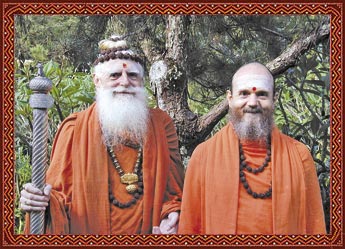 The name Saiva Siddhanta Church means "sacred congregation of Supreme God Siva's revealed Truth." These two Sanskrit words and one English word we consider to be our international trademark. Saiva Siddhanta Church, founded in 1949, was incorporated under the laws of the United States of America in the state of California on December 30, 1957, and received recognition of its US Internal Revenue tax exempt status as a church on February 12, 1962. Among America's oldest Hindu institutions, it established its international headquarters on Kauai, Hawaii, on February 5, 1970. From this Garden Island in the Pacific Ocean, northernmost of the Hawaiian chain that forms the world's most remote land mass, the Church broadly serves the billion-strong Hindu faith (fully one-sixth of the human family). The Church's ministry is dedicated to nurturing the membership and local missions in four continents and to serving, primarily through publications, the community of Hindus throughout the world.

While the Greek-based word church is most commonly understood as a place of worship, the full meaning encompasses the religious congregation and organization on many levels of activity. Church takes on special importance in legal and governmental discussions, where matters of church and state are frequently focused on. In more and more nations, in federal and state governments, religion is defined as church, and the separation of church and state is respected and constitutionally enforced. Such protections, grounded in the concept of church, are crucial to the rights of all religious groups. These include protection from government and from other religions which may seek to dominate faiths with less political power.

At the Church's core is the satguru's ecclesiastical authority and that of the Saiva Swami Sangam, an order of sannyasins who serve full time at Kauai Aadheenam, our international headquarters, ashrama and theological seminary. This is the site of the Kailasa Pitham, the seat of spiritual authority for this ancient guru lineage, formerly located in northern Sri Lanka. Here we protect the purity of the faith and decide matters of education, publication, innovation, theology and Church law.

Over the last half-century, our Church has created a swami order and a theological seminary to train young men from many nations and mold them into religious leaders. We have nurtured an extended family membership that upholds and sets new standards of personal dedication, inner effort, home culture and public protocol in these contemporary times when the diaspora of Hindus has brought them to nearly all countries of the world.

Read about our mission