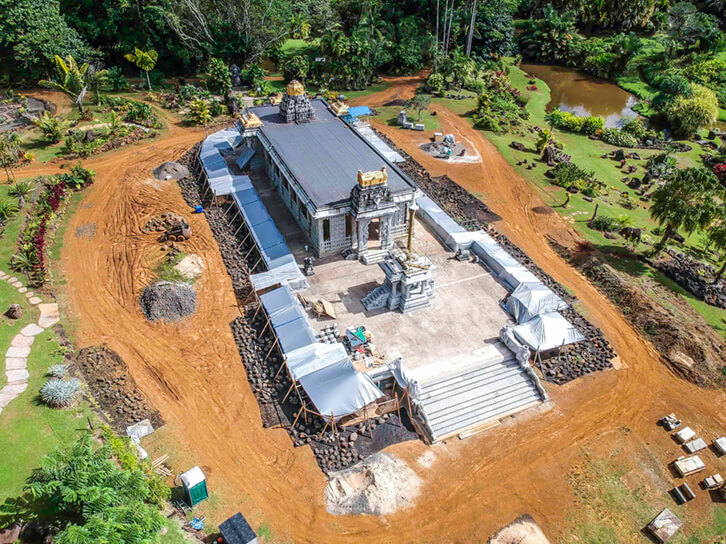 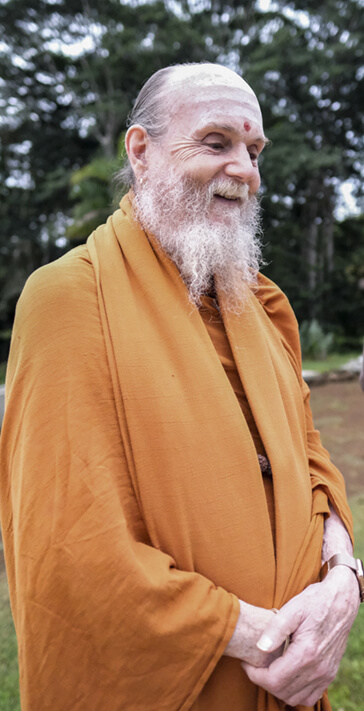 With the completion of the perimeter wall and the massive and artistically impressive front steps, three of our seven silpis returned home in September. The other four men will continue the temple work for up to 30 months. When travel to India opens up and their visa extension is approved, they will have a long visit with their families.

Last year’s fund raising goal (September 2019–August 2020) was $70,000 a month, which for the twelve-month period is a total of $840,000. Thanks to the generous donations of our global family of temple builders, we received $982,695.05. which exceeded our goal by $142,695.05. We will keep the goal the same for the coming twelve months. As in previous years, the major “extra” projects—such as the Temple Builder Pavilion, gold gilding and landscaping around the temple—were funded separately by donors who are dedicated to those specific projects. A small portion of our Iraivan Temple Fund will be used to cover the cost of the initial planting of the newly landscaped areas around Iraivan Temple and the San Marga entrance area.

I will conclude with a quote from the monastery’s Iraivan Temple affirmation: “We see Iraivan fully completed, as a center where Saivites will come to find the center of themselves. We pledge to help preserve and maintain it so that it is a proper, pure, quiet place where devout pilgrims can experience the divine within through the practice of raja yoga and daily sadhanas. There are few such places left on the Earth now. Kauai’s Hindu Monastery is one of them.”

With blessings for a bountiful family life and spiritual progress. 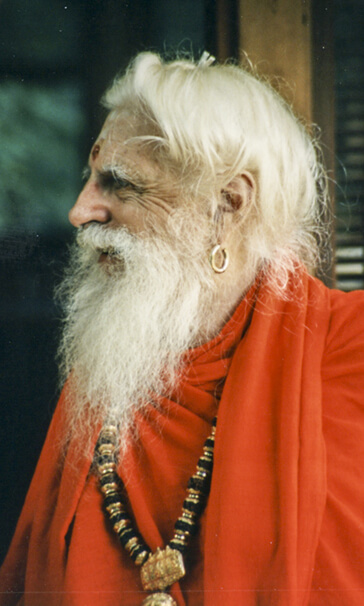 Satguru Sivaya, Subramuniyaswami (1927-2001), founder of the temple, stands with the extinct volcanic mountain, Waialeale, in the background.

In 2001, Gurudeva said: “When you begin the pilgrimage to Iraivan Temple, you drop off and dissolve the karmas of the past. Then, because of the direction the temple is facing, the temple gives a new start, a new impetus for a wonderful future. It is a boon-giving temple, a gift-giving temple, a life-giving temple, a wish-fulfilling temple.” Located in the heart of a traditional Hindu monastery complex reminiscent of ancient mathas and aadheenams of India, Iraivan is more than a temple; it is a pilgrimage destination, a place of sadhana and spiritual rejuvenation. Iraivan Temple is a living edifice that brings ancient tradition into the 21st century, a stable anchor sustaining and strengthening Hindu dharma for our children, their children and generations to come. 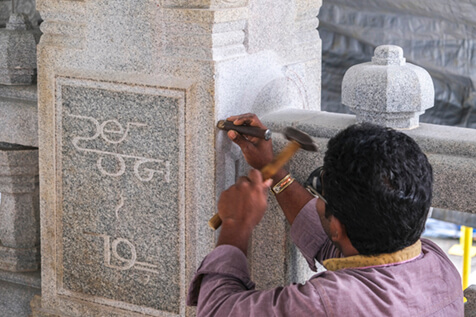 The temple spent most of the last year in a state of concealing grace, with tents and tarps everywhere as work progressed on the front steps, Nandi Mandapam and lava rock face of the plinth. Hundreds of tons of lava rocks still surround the temple, all laid out so the masons can easily select the stones suited to their immediate need. 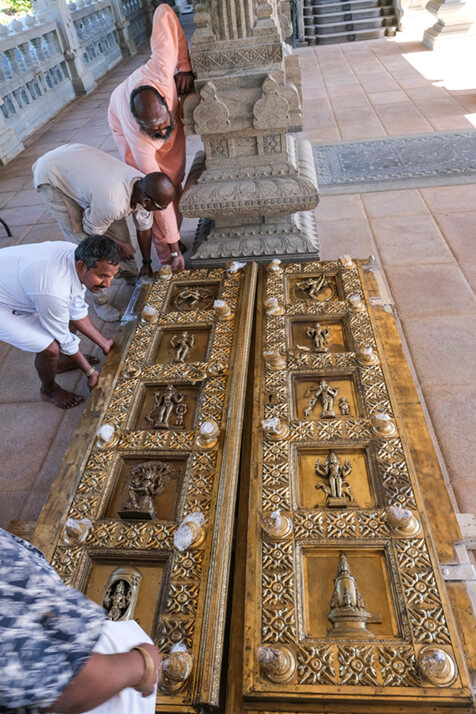 Eastern side of the temple plinth rock facing; laying out the ornate sanctum doors which have ten forms of Siva, in preparation for installation 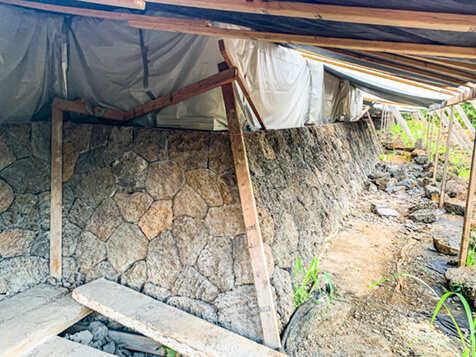 A nearly finished section of the lava rock plinth wall

The contrast is stark between the silpis artistically chipping the front steps’ intricate designs and the masons jackhammering each stone to fit perfectly into place. The silpis follow well-thought-out designs based on centuries of temple building; the masons deal with whatever nature has thrown at them, ultimately fitting the rocks together as if they were made to order. Observers have noted this is among the most well-crafted works of lava rock in Hawaii. Compared to the temple carving, the masons have made rapid progress, even if a bit slower than they had hoped (due to Covid-19 limitations). Their instructions are to use no small stones to fill holes between the natural rocks hand-selected from a field on the south side of Kauai. They have done an extraordinary job, as you can see from the close-up photo. The rocks are placed to form the face of the 60° angled plinth, then filled behind with concrete. The topmost horizontal layer will be made from lava rocks from China that match Kauai lava in color and character but are machine sawn to 2” thickness.

The massive plinth will likely be completed in early 2021. Then attention will shift to the second prakaram temple floor, which will be clad with rose-colored granite tiles. The design is being worked out based upon instructions from master builder/architect Selvanathan Sthapati. It follows the same grid pattern of the rest of the temple floor. Our team has made great progress. 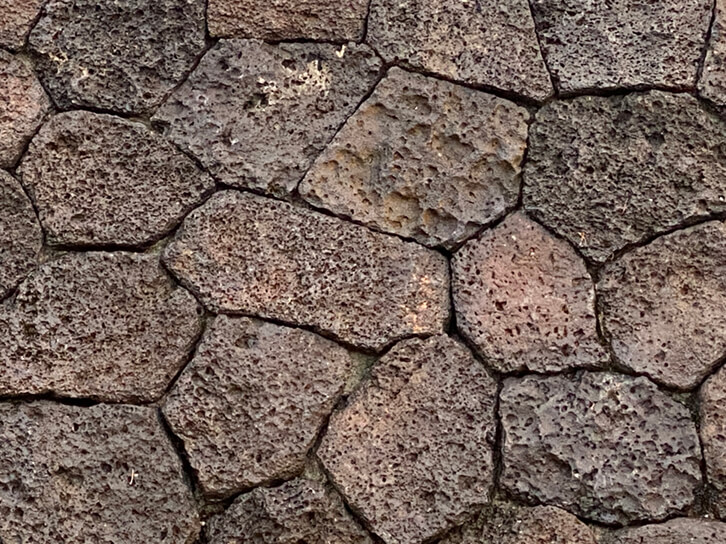 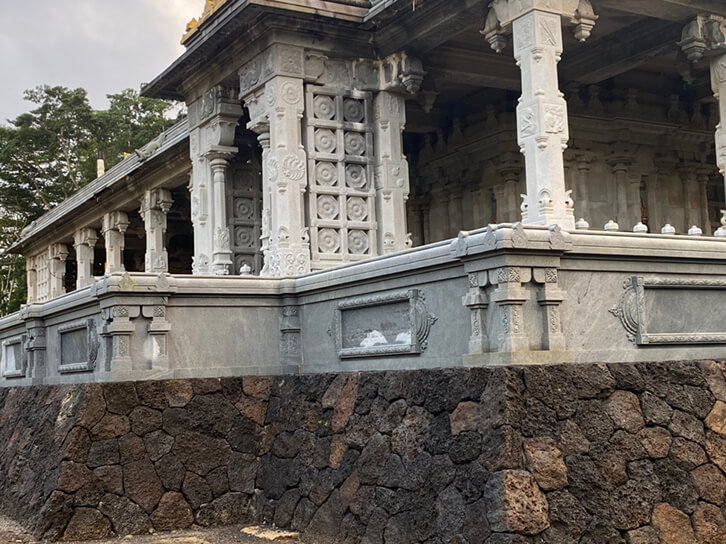 This team has been at this work for many moons. 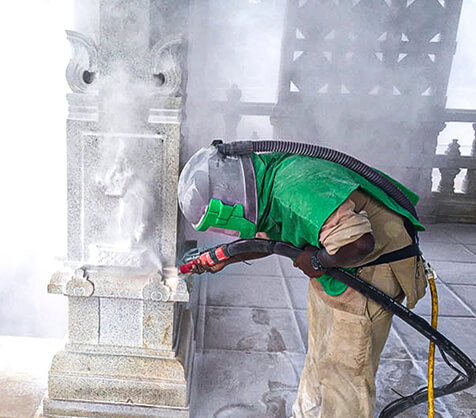 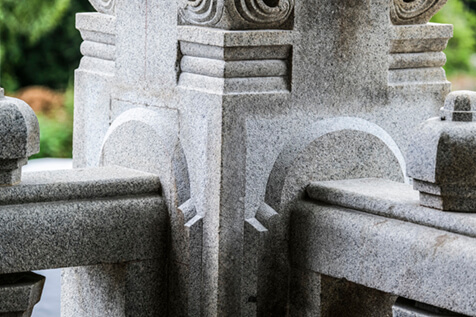 Decorative motif being added to each pillar

This year saw great progress in the sacred gardens, with major landscaping changes, as the gardeners moved closer and closer to the temple. The Dakshinamurti Garden was created from large swaths of mud, dotted with massive rock boulders and planted with hundreds of species of palms and tropical plants that after several months are looking like they were always there. Nothing can be planted within a hundred feet or so of the plinth until the lava rock wall is finished and the land is graded for proper drainage that will direct the almost-constant island rain waters away from the temple foundation.

We are experimenting with geotile, a heavy-duty plastic grid system several inches thick which is placed on the ground, filled with dirt and planted with grass to form walk and road ways. Done right, they avoid mud puddles and can support light vehicles while still looking like a lawn.

The nine 30-foot-wide wide steps of Iraivan took the silpis most of the year to complete. The work began with a large cement pour that provided the foundation upon which the silpis could set the large, flat granite slabs that form the stair risers and treds. As you can see in the cover photo, Iraivan now has a magnificent entrance.

The gold leaf on the temple towers has largely failed in our wildly wet weather. The team that did the original work has developed a new (and expensive) approach they feel will last for decades in the tropics. Fortunately, our fund raising appeal for the gold leaf was a great success in 2020. We have purchased the thicker-than-usual leaf and are ready to go when circumstances are right. The silpis apply detail to the entry stairs 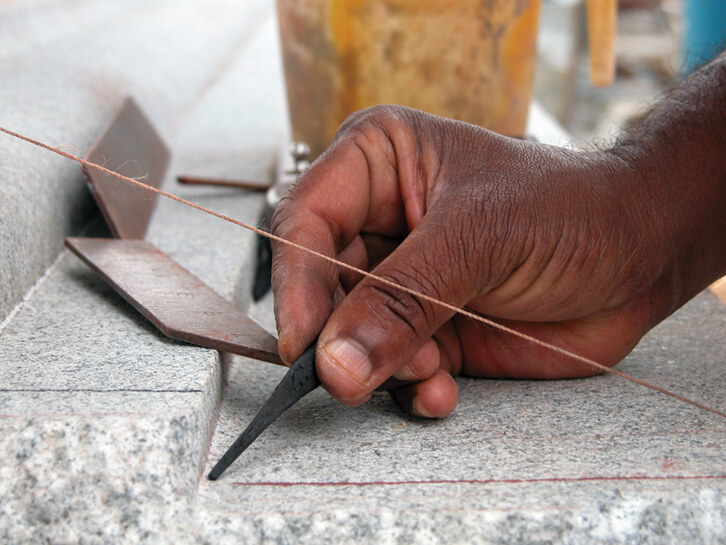 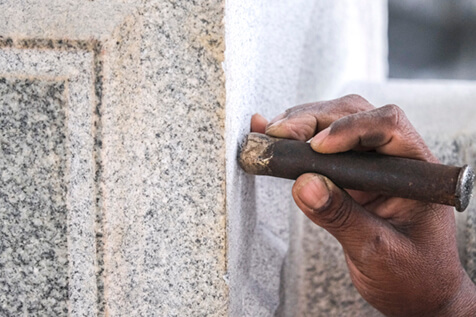 The silpi work in 2021 will focus on a host of tasks around the temple, including the Nandi Mandapam and kodimaram. They will be installing the sanctum doors. A major effort will be undertaken to fix the leaking main roof, and to remove the calcite deposits caused by those leaks. The silpis will install granite cladding on the Kadavul Nandi Mandapam. Iraivan’s Nandi Mandapam should get its copper roof, and a small Chola-style Ganesha shrine will be installed near the beginning of San Marga. A local contractor will install the tile floor. The gold leafing of the vimanam, kodimaram and four other towers is scheduled for mid 2021. The design and permitting process for the entrance parking and restrooms of the future Visitors’ Center adjacent to the Rudraksha Forest should be completed this coming year and put out for bids. Landscaping efforts will address the two sides of the San Marga entry and some work on the Path of the Saivite Satgurus.

LET’S WORK TOGETHER TO COMPLETE IRAIVAN

With the main edifice nearing completion, Iraivan Temple needs your support now more than ever. Be generous and send your special year-end contribution today. Such a place is out of this world!