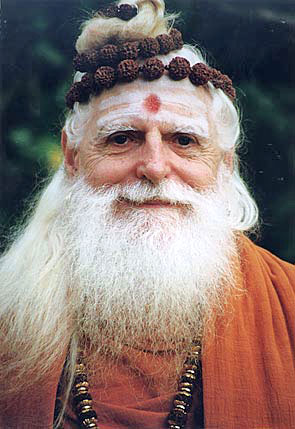 Once in a while on this Earth there arises a soul who, by living his tradition rightly and wholly, perfects his path and becomes a light to the world. Satguru Sivaya Subramuniyaswami (1927–2001) was such a being, a living example of awakening and wisdom, a leader recognized worldwide as one of Hinduism's foremost ministers. In 1947, as a young man of 20, he journeyed to India and Sri Lanka and two years later was initiated into sannyasa by the renowned siddha yogi and worshiper of Siva, Jnanaguru Yogaswami (1872–1964) of Sri Lanka, regarded as one of the 20th century's most remarkable mystics.

For over five decades Subramuniyaswami, affectionately known as Gurudeva, taught Hinduism to Hindus and seekers from all faiths. In the line of successorship, he was the 162nd Jagadacharya of the Nandinatha Sampradaya's Kailasa Parampara and Guru Mahasannidhanam of Kauai Aadheenam (also known as Kauai's Hindu Monastery), a 382-acre temple-monastery complex on Hawaii's Garden Island. From this verdant Polynesian ashram on a river bank near the foot of an extinct volcano, Gurudeva's successor, Satguru Bodhinatha Veylanswami, and the monastics live their cherished vision, following a contemplative and joyous existence, building a jewel-like white granite Siva temple, meditating together in the hours before dawn, then working, while rainbows fill the sky, to promote the Sanatana Dharma.

Life of a Contemporary Hindu Guru 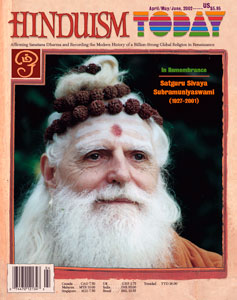 Gurudeva was lauded as one of the strictest and most traditional gurus in the world. His Hindu Church nurtures its membership and local missions on five continents. His educational institution, Himalayan Academy, serves, personally and through its Hinduism Today magazine, books, courses and travel/study programs, serious seekers and Hindus of all denominations. Gurudeva's mission, received from his satguru, was to protect, preserve and promote the Saivite Hindu religion as expressed through its three pillars: temples, satgurus and scripture. That mission is now carried forward by his monastic and family communities. The congregation of Saiva Siddhanta Church is a global fellowship of family initiates, monastics and students who follow the sadhana marga, the path of inner effort, yogic striving and personal transformation. Missionaries and teachers within the family membership provide counseling and classes in Saivism for children, youth and adults.

Gurudeva was the hereditary guru of 2.5 million Sri Lankan Hindus. His various institutions form a Jaffna-Tamil-based organization which has branched out from his Sri Subramuniya Ashram in Alaveddy to meet the needs of the growing Hindu diaspora of this century. He also established a seven-acre monastery in Mauritius, which includes a public Spiritual Park. Gurudeva gently oversaw more than 50 independent temples worldwide.

Hinduism Today is the influential, award-winning, international monthly magazine founded by Gurudeva in 1979. It is a public service of his monastic order, created to strengthen all Hindu traditions by uplifting and informing followers of the Sanatana Dharma everywhere. Gurudeva was author of more than 30 books unfolding unique and practical insights on Hindu metaphysics, mysticism and yoga. His Master Course lessons on Saivism, taught in many schools, are preserving the teachings among thousands of youths.

Hindu Heritage Endowment is a public service trust founded by Gurudeva in 1995. It seeks to establish and maintain permanent sources of income for Hindu institutions worldwide. In 1986, New Delhi's World Religious Parliament named Gurudeva one of five modern-day Jagadacharyas, world teachers, for his international efforts in promoting and chronicling a Hindu renaissance.

Then in 1995 it bestowed on him the title of Dharmachakra for his remarkable publications. The Global Forum of Spiritual and Parliamentary Leaders for Human Survival chose Subramuniyaswami as a Hindu representative at its unique conferences. Thus, at Oxford, England, in 1988, Moscow in 1990 and Rio de Janiero in 1992, he joined hundreds of religious, political and scientific leaders from all countries to discuss privately, for the first time, the future of human life on this planet. 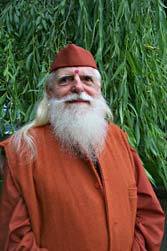 At Chicago's historic centenary Parliament of the World's Religions in September, 1993, Gurudeva was elected one of three presidents, along with His Holiness Swami Chidananda Saraswati of the Rishikesh-based Divine Life Society and Kerala's Ammachi, Mata Amritanandamayi Ma, to represent Hinduism at the prestigious Presidents' Assembly, a core group of 25 men and women voicing the needs of world faiths.

In 1997 he responded to the US President's call for religious opinions on the ethics of cloning from the Hindu point of view. Later that year, he spearheaded the 125th anniversary of Satguru Yogaswami and his golden icon's diaspora pilgrimage through many of the over 75 Sri Lanka temples and societies around the globe. In 1998, the Vishva Hindu Parishad of Kerala sent an envoy to Kauai to honor and recognize Gurudeva as the "Hindu Voice of the Century."

In the last few years of his life Gurudeva was a key member of Vision Kauai 2020, a small group of community leaders that includes the Mayor, former Mayor and County Council members. They met monthly to fashion the island's future for twenty years ahead, based on moral and spiritual values. If you ask people who know Gurudeva what was so special about him, they may point to his great peace, presence and centeredness, to his incredible power to inspire others toward their highest Self, to change their lives in ways that are otherwise impossible, to be an unfailing light on their path, to be a voice of Indian spiritual life, to bring the best of the East and the best of the West together, to be a father and mother to all who draw near, a living example of the pure path taught by his guru and followed by his devoted shishyas. 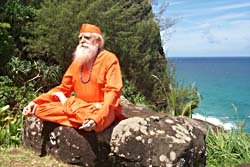 In April of 1999 Gurudeva lead 45 spiritual aspirants on an Innersearch from Vancouver to Anchorage, Alaska. Their ship, the MS Noordam, journeyed for 7 days and nights as they studied meditation and the mystical life together, explored the glaciers and redefined the cruise experience along the way. In Anchorage, Gurudeva founded the first Hindu temple in that state, calling together the native American Indian leaders to participate in the event. He also initiated a powerful series of book signings in California, Washington and Alaska, introducing his newest legacy book, Merging with Siva, to thousands of seekers.

In August he traveled to Malaysia and Mauritius, where he met with the nation's leaders on several family-related topics, opened his Spiritual Park for 3,000 special guests, spent precious time with his Church members and continued the dynamic book signings, this time adding his newest book, Weaver's Wisdom, to the list.

In March and April of 2000 he lead another Innersearch Travel-Study program to the Caribbean, visiting six nations with 53 of his devotees and meeting the Hindu leadership in that remote part of the world, with special events among 4,500 Hindus who came to honor him in Trinidad.

On August 25, 2000, he received the prestigious United Nations U Thant Peace Award in New York (previously bestowed on the Dalai Lama, Nelson Mandela, Mikhail Gorbachev, Pope John Paul II and Mother Teresa). He addressed 1,200 spiritual leaders gathered for the UN Millennium Peace Summit, with the message, "For peace in the world, stop the war in the home." Upon his return to Kauai, 350 citizens and county and state officials gathered to herald his accomplishments on the island and beyond. Governor Benjamin Cayetano wrote: "I am especially grateful for your efforts to promote moral and spiritual values in Hawaii. May our people forever embrace the message of peace you have so eloquently supported in your gracious wisdom."

In August, 2001, Gurudeva took 72 devotees on an incredible journey through Northern Europe, founding new Hindu temples along the way and visiting the Tamil communities in half a dozen nations. It was a fitting conclusion to his remarkable life. Just before departing for the European Innersearch, he completed his last legacy book, Living with Siva. Only weeks after returning from that dynamic odyssey, he attained his mahasamadhi.

Gurudeva departed from this world as courageously as he had lived in it. Learning on October 9, 2001, that he had advanced, metastasized intestinal cancer, confirmed by a host of specialists in three states, all concurring that even the most aggressive treatment regimens would not prove effective, he declined any treatment beyond palliative measures and decided to follow the Indian yogic practice, called prayopavesha in Sanskrit scripture, to abstain from nourishment and take water only from that day on. He left his body peacefully on the 32nd day of his self-declared fast at 11:54 pm on Monday, Chitra nakshatra, November 12, 2001, surrounded by his twenty-three monastics. Gurudeva consoled them, "Don't be sad. When I am gone from this world, I will be working with you on the inside twenty-four hours a day."

When notified of Gurudeva's passing, Sita Ram Goel, one of India's most influential Hindu writers and thinkers, wrote, "He has done great work for Hinduism, and the recent reawakening of the Hindu mind carries his stamp." Ma Yoga Shakti, renowned yoga teacher, said, "For more than five decades, Subramuniyaswami, a highly enlightened soul of the West—a Hanuman of today, a reincarnation of Siva Himself—has watered the roots of Hinduism with great zeal, faith, enthusiasm and whole-heartedness." Sri Shivarudra Balayogi Maharaj of India said, "By his life and by his teaching, Satguru Sivaya Subramuniyaswami has helped make Hinduism an even greater gift to humanity." From Jaffna, president of Sivathondan Nilayam Arunasalam Sellathurai Swamigal wrote: "The life, mission and mandate of His Holiness Sivaya Subramuniyaswami form an epic chapter in his unending spiritual quest leading him to the founding of the Saiva Siddhanta Church and a monastic order in Hawaii—a magnificent task! This will ever remain a monument to his spiritual fervor, proclaiming worldwide, East and West, in trumpet tones that Swamigal was a trailblazer of Lord Siva's choice to glorify the spiritual heritage and the essence of Saiva Siddhanta."

Empowered by his Self Realization, his ordination as a satguru and the blessings of Gods and devas, Gurudeva contributed to the revival of Hinduism in immeasurable abundance. He was simultaneously a staunch defender of traditions, as the proven ways of the past, and a fearless innovator, rivalling the rishis of Vedic times in instilling fresh understanding and setting new patterns of life for contemporary humanity. His founding of the first major Hindu monastery in the Western world in Hawaii, and the hand-carved granite Siva temple there, will certainly go down as among his most enduring legacies.